Suzanne Scott Constantine is a new artist of Building 5 at the Workhouse Arts Center in Lorton Virginia. She creates political art of passion and power. Her solo show opens this Saturday, April 9th, from 6-9pm at the Workhouse Arts Center. Ms. Constantine, a writer as well as an artist, will give a talk on her paintings at this time, and will read passages that speak to her art. Here is her artist’s statement on this series of work….

Surveillance. It’s one of my obsessions. You can see it in my eyes: I draw them, I paint them, and I wear them embedded in necklaces and earrings. I convert into eyes objects in the world such as oval shaped boxes or discarded lamp globes. Sometimes my obsession takes the form of painting nude women in positions of submission, with disembodied eyes staring. At other times, it emerges as a strong nude female staring back, reclaiming the power of the objectifying gaze.

In the image here, my obsession with eyes merges with a painted blue eye that includes the names of some of the unarmed black men killed by police since 1999. That year is burned in my memory because of the public shock and outrage over the death of Amadou Diallo, an unarmed immigrant with no criminal record. Four NYPD officers shot him 41 times outside of his own home. We know his name, and some of the others, such as Trayvon Martin, Walter Scott, and Tamir Rice. I discovered the names of many more when I went on a mission to name all of the other unarmed men of color killed since Diallo’s murder. A shameful number of names filled up page after page in my oversized sketchbook. Although some of the names are duplicated in this painting for visual effect, I could not have written every name on this artwork. 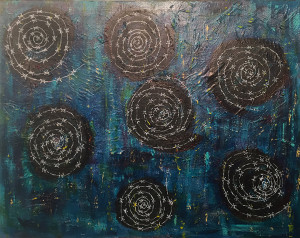 What is the visual connection between the names and the single blue eye in the middle of the names? Students frequently ask that question. My response is, “Because it is I.” Even though the eye serves as a symbol of the gaze and of surveillance, it also connotes theThird Eye, the eye of intuition. According to some philosophical and religious traditions, the third eye is the gateway to forms of higher consciousness. In this painting I am calling on myself and others to allow ourselves to look deeply into the names of real men and boys and to see what is invisible to many people — the relationship between these killings and mass incarceration of black men for minor offenses. But pointing a finger only at police for the senseless killings and for mass incarceration of black men is too easy, and it lets the rest of us off the hook. That there are too many names to include in one small painting is indictment against me – and all of us. As Attorney and Professor Nikema Levy-Pound points out, we are all complicit in the institutions that allow the indiscriminate use of force against anyone, but especially those who are unarmed. We allowed the war on drugs that targeted poor inner city blacks, the build-up of military-style police forces, and the creation of the for-profit Prison Industrial Complex. In my created world of art, the eye becomes an I; as others observe the eye, the I becomes a We.

In the upside-down world of surveillance that has resulted in mass incarceration and untold numbers of black men (and women) killed, the eye in the painting also represents the revolutionary gaze, which has literally made the invisible visible. The intrusive security cameras in buildings, on streets, and in airports may have been used against marginalized people in the past, people without the social, political or economic capital to resist. But now, the gaze is in the hands of those marginalized, in the form of smart phones  recording photos and video that make it instantly onto social media. 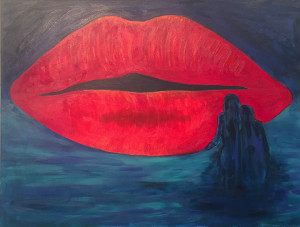 So my obsession with surveillance becomes even more complicated as I applaud the revolutionary gaze of the smart phone camera and make art about the confirmed record of unarmed black men shot dead in the U.S. I acknowledge that I am more troubled by the objectifying gaze than by the anonymous surveillance from airport scanners and security cameras, which I have come to ignore. I also am far more troubled about search and surveillance procedures by authorities than I am about cameras in the hands of those subjected to search and surveillance. It’s about who controls the surveillance; who has the power, who does not.