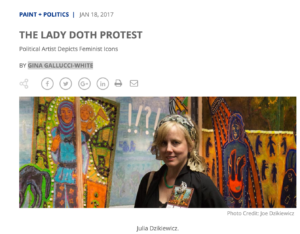 Thank you ,Gina Gallucci-White, for interviewing me about my solo show “Protest to Power” , BlackRock Center for Arts, for  “Culture Spot”. It is a pleasure to be part of “Featured Stories”! And thank you, Anne Burton for speaking about my work.
From the article….

Julia Dzikiewicz was one of the first artists to move into a studio at the Workhouse Arts Center in Lorton, Va. in 2008. While in her studio one day, the political painter noticed tour groups going past the facility, which used to be a prison. Her research revealed that the jail housed the 1917 suffragists who blocked the sidewalk in front of The White House demanding the right to vote.

“I discovered a part of women’s history that I never knew,” she said. “As I learned about the women who were beaten and put on hunger strikes here, it called out to be told in paint.”

Some of the pieces from her feminism series are on view through Feb. 4 at BlackRock Center for the Arts’ Kay Gallery in Germantown. “Protest to Power” features six encaustic paintings portraying women–including Ida B. Wells, Hillary Clinton and Malala Yousafzai– who have worked hard for their beliefs